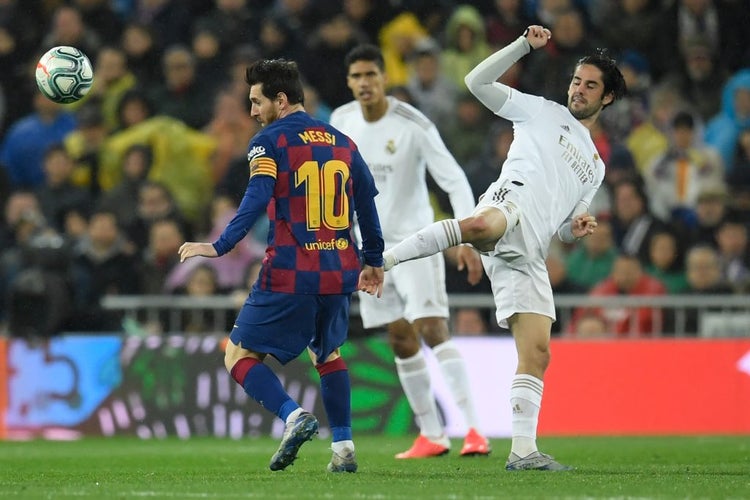 Real Madrid won the Clasico and might have saved their season as they ended their slump in the best way possible on Sunday, by beating Barcelona 2-0 and returning to the top of La Liga.

Vinicius Junior’s deflected finish and a stoppage-time goal from Mariano Diaz decided a frenzied contest at the Santiago Bernabeu, where Madrid were given life after a Champions League defeat by Manchester City had left them on the brink of crisis.

Instead, an affirming victory sends them one point clear at the top of the table and shifts focus back to Quique Setien’s Barcelona, who were outfought and, at times, outplayed, even if they had chances too.

Lionel Messi’s rasping shot was denied by Thibaut Courtois in the first half but it was the Argentinian’s opposing captain Sergio Ramos who was thrashing his arms in celebration after the final whistle.

His reaction was an indication of the importance of this victory, not only for the effect it has on the standings but on the dynamic of the title race, which had seemed to switch firmly in favour of Barca.

Cristiano Ronaldo was watching from an executive box and Madrid could have done with him during a period in which they had won only one of their last five games.

Zinedine Zidane said on Saturday this match would not decide who lifted the trophy in May but a Barca win and a five-point gap might well have been difficult to close.

Yet from the start, Barcelona seemed keener to kill the game than win it, playing for time in the hope of keeping the contest tight, when they might have been better off attacking their opponents’ fragility.

Home advantage has certainly meant little in this fixture given Barca had won their last four league meetings here, with Ramos admitting last week that Madrid’s players have begun to feel anxiety inside their own stadium.