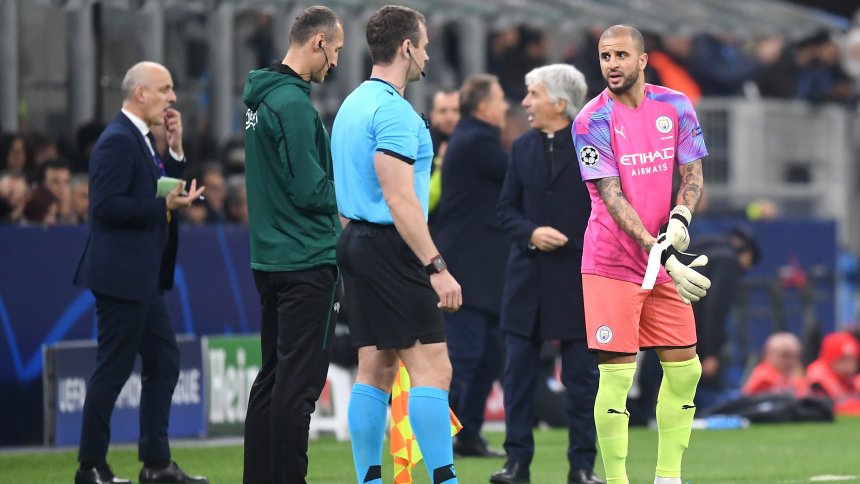 After the half-time substitute of Ederson, Claudio Bravo, was sent off against Atalanta, Kyle Walker was forced to take over as an emergency goalkeeper for Manchester City.

After first-choice goalkeeper Ederson suffered a minor injury and was taken off as a precaution at the interval with the score at 1-0.

It took only four minutes for the Italian side to make their mark, with Chelsea loanee Mario Pasalic going past Bravo on 49 minutes after the early strike by Raheem Sterling.

Then the 34-year-old was guilty of a terrible mistake, running 30 yards off the line before knocking out Atalanta winger Josip Ilicic when he was clean through on goal.

Belarusian referee Aleksei Kulbakov reached for his red card, a decision then backed by VAR, confusion about what would happen next.

With only one substitute remaining and no other goalie available, Pep Guardiola called Kyle Walker from the bench to take the goalkeeper’s jersey for the final eight minutes plus stop time.

Eventually, it was determined that Mahrez would be substituted by full-back Walker to face a free-kick in his first goal action and gathered it at the second attempt after spilling it.

But after a 1-1 draw, 10-man City clung on for a point, ensuring they’ll have to wait until match five to win Group C qualification.

Asked about his experience in a post-match interview, Walker said to BT Sport: “I sometimes try to wind up the goalkeepers in training by telling them to catch it, but as I found out tonight, you sometimes need two touches.” Apart from all the jokes, we came here to get a point or a win. We knew it would be hard because they are going man-to-man and for a reason they are in the Champions League.

“It’s a good point to get out of here with how we finished the game with a draw and we’re taking it on. Now the focus is on Sunday’s Liverpool.”