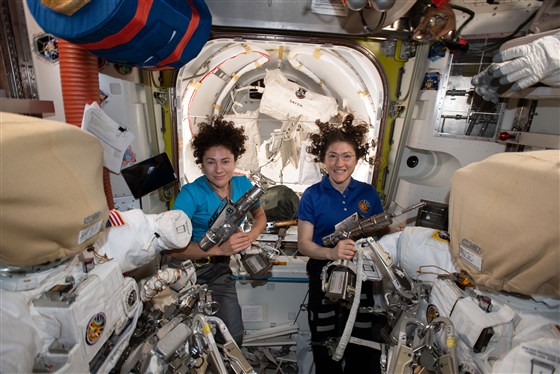 Two astronauts have made history Friday morning as the first women to take part in an all-female spacewalk.

At about 7:50 a.m., Christina Koch and Jessica Meir stepped outside the International Space Station to urgently repair their power system. The spacewalk was stopped 7 hours and 17 minutes later, just before 3 p.m.

“Another milestone in human space exploration is officially complete!” said a NASA tweet. We were successful in replacing a defective battery charge / discharge system that could not be triggered earlier this month when new lithium-ion batteries were installed outside the station, according to NASA. The defective BCDU will be returned to Earth for inspection. We were also able to extend their spacewalk by around two hours to handle some extra “get-ahead tasks” at the space station.

NASA says the failure has not impacted the operation of the station or the safety of the crew.

Also, NASA moved the scheduled fix up from October 21 to Friday.

NASA has noted the historical importance of the event NASA originally planned an all-female spacewalk in March.

The event-which was to include Koch and NASA astronaut Anne McClain-was cancelled because there were not enough spacesuits of the right size available on the station.

NASA was criticized for not having sufficient uniforms for two women to take part together in a spacewalk.

It was Meir’s first spacewalk and, according to NASA, Koch’s fourth. Both are on their first spaceflight after being chosen as astronaut candidates in 2013, as part of a 50 percent female class.

The three commenters who narrated the NASA endeavor were all women as well.

Meir thanked the president, but said, "We don’t want to take too much credit because there have been many other female spacewalkers in front of us. NASA plans to put the first woman on the moon by 2024. Forty-three spacewalks have included a woman since 1984, when a Russian cosmonaut walked the spacewalk in July of that year and a NASA astronaut in October. Today's #AllWomanSpacewalk is a milestone worth noting & celebrating as we look forward to putting the first woman and the next man on the Moon by 2024 with our #Artemis program. Tune in to see @Astro_Christina & @Astro_Jessica work in the vacuum of space: twitter.com/i/broadcasts/1…