Composer Tony Britten reveals the background behind the iconic anthem that precedes every UEFA Champions League match and the stars talk about what it means to them.

The theme song, officially titled simply ‘Champions League’, is the official anthem of the UEFA Champions League, written in 1992 by British composer Tony Britten and based on George Frideric Händel’s Zadok the Priest. The whole song is about three minutes long which has two short verses and a chorus. The chorus is in three official languages of UEFA i.e. English, French and German. The climactic moment is set for the exclamation “Die Meister! Die Besten! Les grandes équipes! The champions!” 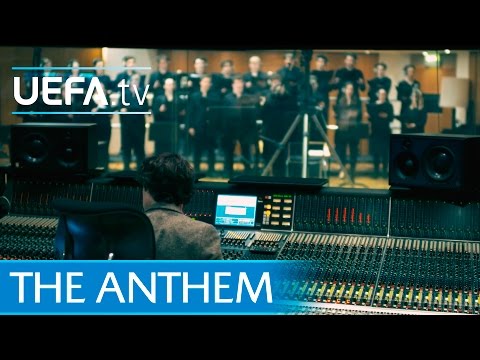 What the song means to players

“When you get on the pitch and you line up and the Champions League anthem starts, that would give anyone goosebumps”
– Thiago Silva, PSG

When you’re on the pitch and you listen to the anthem, you know it’s an important and special match
– Leo Messi, FC Barcelona

Even from the stands, from the outside, it’s incredible
– Luis Suarez, FC Barcelona

Magic… it’s magic above all else. When you hear the anthem, it captivates you straight away. You just want to see what is going to happen
– Zinedine Zidane, Real Madrid